Over 30 civilians killed during two days of shelling in Gorlovka, E. Ukraine (VIDEO) 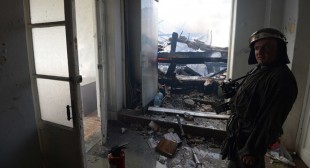 Two days of shelling in Gorlovka, in the Donetsk region of Eastern Ukraine, have resulted in 31 civilians being killed there, local authorities say. Ukrainian troops and anti-government forces are blaming each other for the bloodshed.