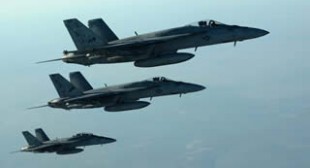 The United States and its partners launched a new round of strikes against Islamic State militants in Syria on Wednesday, only hours after President Barack Obama called on the world to help end the extremist group’s reign of terror in the Middle East.

“I can confirm that US military and Arab partner forces are undertaking additional strikes today against ISIL terrorists in Syria,” Pentagon press secretary Rear Adm.