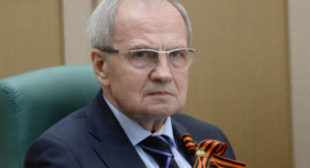 The chairman of the Russian Constitutional Court has said that Barack Obama’s statements about American exceptionalism were very similar to propaganda used by Nazi Germany and equally dangerous to world peace.

“The idea of specialness, exceptionality and unique rights of the American state and American people has been used in US internal political rhetoric for quite a while,