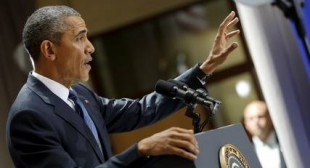 A new White House plan to combat climate change and update transportation systems would impose a fee of $10 per barrel of oil to fund $300 billion in spending over the next decade. President Barack Obama is expected to make his case to Congress next week.

Promoting a “21st century clean transportation system,” the Obama administration unveiled its transportation budget Thursday, first to Politico via anonymous senior officials, then to the rest of the media through a fact sheet.