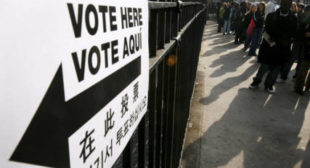 Hundreds of voters in New York are expected to file a lawsuit against the state Monday claiming their party affiliation was changed without their consent and they cannot vote in Tuesday’s hotly-contested primary.

The lawsuit, which is being filed by Election Justice USA, calls for New York to switch to an open system allowing anyone to vote in the primaries, regardless of their party affiliation.