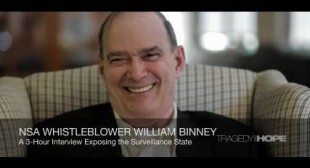 A 36-year veteran of America’s Intelligence Community, William Binney resigned from his position as Director for Global Communications Intelligence (COMINT) at the National Security Agency (NSA) and blew the whistle, after discovering that his efforts to protect the privacy and security of Americans were being undermined by those above him in the chain of command.

The NSA data-monitoring program which Binney and his team had developed — codenamed ThinThread — was being aimed not at foreign targets as intended, but at Americans (codenamed as Stellar Wind); destroying privacy here and around the world. Binney voices his call to action for the billions of individuals whose rights are currently being violated.

William Binney speaks out in this feature-length interview with Tragedy and Hope’s Richard Grove, focused on the topic of the ever-growing Surveillance State in America.

Subscribe to the Peace Revolution podcast produced by Tragedy and Hope: http://www.PeaceRevolution.org