Not Russian op, but NATO’s incursion in Middle East to blame for Syrian crisis – Moscow 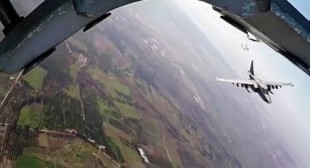 Russia’s Defense Ministry has slammed NATO chief Jens Stoltenberg, labeling as ‘nonsense’ his comments that the Russian air operation in Syria is causing tensions and undermining the peace process in the country.

The NATO Secretary General made the controversial statement on Friday when he arrived at the EU defense ministers meeting in Amsterdam.