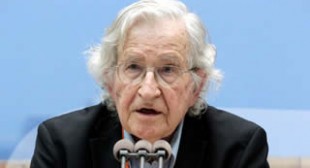 Noam Chomsky, the noted radical and MIT professor emeritus, said the Republican Party has become so extreme in its rhetoric and policies that it poses a “serious danger to human survival.”

“Today, the Republican Party has drifted off the rails,” Chomsky, a frequent critic of both parties, said in an interview Monday with The Huffington Post.