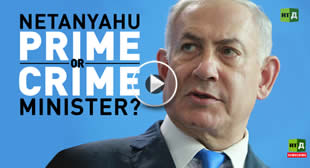 Prime Minister Benjamin Netanyahu has been in the driver’s seat on and off since 1996 and is poised to become Israel’s longest-serving leader. The veteran politician, widely known as ‘Bibi’, is also at risk of losing his grip on power after a series of corruption scandals involving him came to light.

RT America correspondent, Anya Parampil, tracks Bibi’s rise to power from a UN ambassador with fluent American-accented English to the leader of the right-wing Likud party. She takes a look at Netanyahu’s special friendship with Washington, members of the controversial first family and ongoing investigations over alleged bribery.