NATO logic: Russia is a grave threat, but expansion ‘nothing to do’ with Moscow 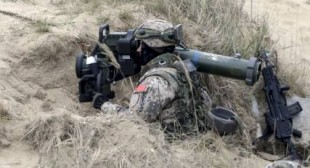 The 28-member western military bloc has once again “categorically” denied that it poses any threat to Russia, arguing that its ongoing enlargement is “not directed against anyone”.

The comments are just the latest in the war of words between NATO and Russia, but it’s another example of how nonsensical the alliance’s conflicting talking points are.