Moscow to Trump: Are ‘smart’ missiles an attempt to destroy alleged chem attack evidence in Syria? 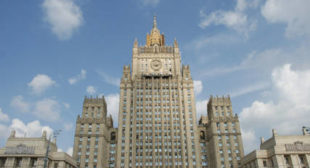 Responding to a threat from US President Donald Trump, who said Russia should prepare for “nice new and smart missiles” launched by America at Syria, Moscow said if the weapons were smart, they would target terrorists. “Smart missiles should fly towards terrorists, not [Syria’s] lawful government, which has spent several years fighting against international terrorism on its territory,” Russian Foreign Ministry spokesperson Maria Zakharova said in response to Trump’s tweet on Wednesday.