Moscow: Israel’s Use of Force Against Palestinians in Gaza ‘Unacceptable’ 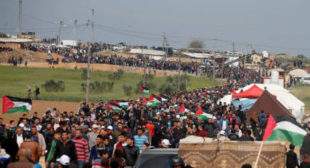 The Russian Foreign Ministry has commented on the mass protests of Palestinians on the Israeli-Gaza border called the Great March of Return that has lead to more than 1,000 being injured. Russia considers that the indiscriminate use of force against the civilian population on the border between Israel and the Gaza Strip to be unacceptable and calls upon Palestinians and Israelis to refrain from steps that will provoke the further increase of dangerous tensions, the Russian Foreign Ministry said.