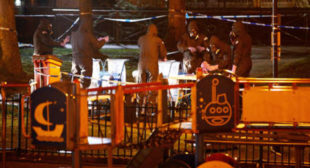 The UK Foreign Office has confirmed the content of the reported document with London’s “proof” of alleged Russian involvement in the poisoning of Skripal, saying that it fully reflects May’s position. According to the Russian Foreign Ministry, the analysis of the Skripals’ case “shows that the UK authorities are not interested in finding out the motives and those responsible for the crime in Salisbury and suggests that the British intelligence services are involved in it.”