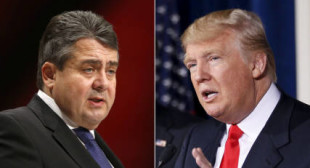 The German vice chancellor took aim at Trump and also right-wing politicians in Europe, saying they were all a threat to “social cohesion.”