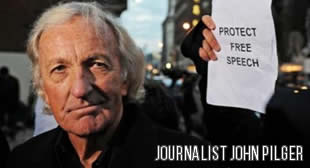 Noted journalist and filmmaker John Pilger’s collection of work has been archived by the British Library, but deep-rooted problems of Western media create an increasingly difficult landscape for ethical journalism, as Pilger explained in an interview with Dennis Bernstein and Randy Credico.

Emmy award-winning filmmaker John Pilger is among the most important political filmmakers of the 20th and 21st century. From Vietnam to Palestine to atomic war, Pilger’s work has been on the cutting edge, and his stinging critique of western media has always be revelatory. And, no doubt, his biting analysis is more relevant and important now than ever.  His latest film, “The Coming War on China” powerfully presages the growing potential for war between the US and China.