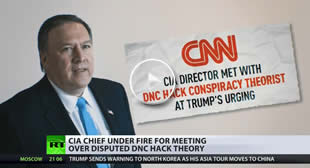 Bill Binney tells RT about his meeting with CIA chief Mike Pompeo, at which he presented evidence the DNC documents were downloaded locally.

NSA whistleblower William Binney spoke to RT about his recent meeting with CIA director Mike Pompeo, where they discussed accusations that Russia meddled in 2016 US presidential election by hacking the Democrats.