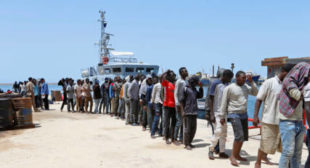 The EU’s new plan to create refugee camps in North Africa is unlikely to ever work, as it’s never considered the situation on the ground – something that Europe helped create when it intervened in Libya, experts warn. Years of unending migrant influx have apparently stretched both the capacity and hospitality of some European nations to the limit. While the new Italian Euroskeptic government has outright refused to take in any new arrivals, arguing that it has too many already, the Swedish government struggles with a crime wave that followed a mass influx of migrants.