Less than half of Russians worried about catching Covid-19, poll shows, but only one in three say they have had vaccine or virus 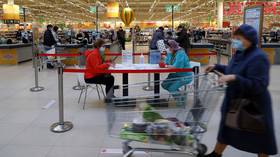 The majority of Russians believe they haven’t yet had Covid-19, new research reveals, but more than half of people say they aren’t actually worried about catching the virus and far fewer say they’ve signed up for a vaccine so far.

That’s according to a new survey conducted by Moscow’s Levada Center, a pollster registered as a foreign agent by Russia’s Justice Ministry over links to overseas funding, which found that the majority of those asked were broadly unconcerned about the personal consequences testing positive would have.

Around 55% of the 1,620 respondents told the pollsters that they were unafraid of contracting the virus, while 42% said they were worried about the possibility.