Lavrov reveals proof of Kiev’s involvement in sabotage in Crimea 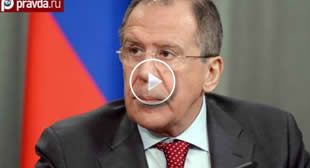 Moscow possesses strong evidence that Ukraine really prepared sabotage in the Crimea. Russia is ready to provide representatives of the Western countries with this evidence, Sergey Lavrov, the Minister of Foreign Affairs said.

‘We really don’t conceal what is known, we show people who were detained, stores with weapons and munition, which were detected in the Crimea.

Of course we cannot show everything on TV, but we have irrefutable evidence that it was sabotage, which had been masterminded by the Main directorate of intelligence of the Ukrainian Defence Ministry and aimed to destabilize the Russian Crimea,’ Lavrov claimed.

The diplomat also added that ‘Russia is open for provision of additional facts, apart from those revealed to public, to our Western partners, who are seriously interested in avoidance of what happened in the future. For that to happen, one should influence Kiev,’ the Minister stated.

On 10 of August the Russian Federal Security Service reported on prevented terror acts in the Crimea and several attempts of the Ukrainian sabotage-reconnaissance groups to penetrate the border. Combat clashes killed two Russian military men.