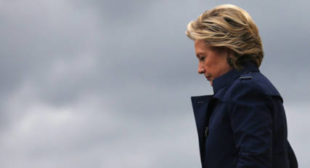 Former Democratic presidential candidate Hillary Clinton is a curse for Democrats, who are now going out of their way to distance themselves from the former lawmaker, according to political operatives. Clinton, who just two years ago enjoyed the almost unanimous support of the Democratic Party, is now a perceived as a ‘kiss of death’ whose mere appearance can torpedo the upcoming midterm elections, a senior Democratic strategist told the Washington Examiner.