Judge Nap: Many in the Intelligence Community ‘Fear’ a Hillary Presidency 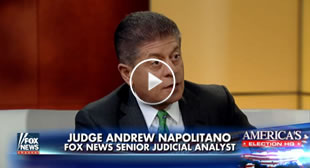 The revelation that the Democratic National Committee’s server may not have been hacked by Russia but by a disgruntled member of the U.S. intelligence community is a sign of how much anxiety about Hillary Clinton there is in that community, Judge Andrew Napolitano said on “Fox and Friends” this morning.