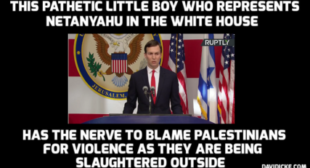 ‘Jared Kushner’s speech at the US Embassy opening ceremony in Jerusalem claims both sides of an Israeli-Palestinian peace deal could gain more than they give, as Israeli forces shot dead 41 protesters on Monday.

Kushner, whom President Donald Trump tasked with bringing peace to the Middle East, said the US administration had almost completed a peace plan, but is undecided about when to reveal its contents, in light of the outrage the US embassy move sparked.