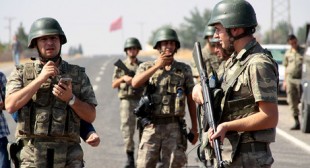 Following the serious violation of Iraq’s sovereignty by Turkish ground troops, Iraqi Prime Minister Haider Abadi has accused its neighbor of being a hub for the “majority” of illegal oil smuggled by ISIS terrorists.

During a meeting with German Foreign Minister Frank-Walter Steinmeier, Abadi stressed the importance of stopping oil smuggling from jihadi-controlled parts of Iraq and Syria.