‘Is This a Joke?’: US Media Not Getting Behind Clinton’s Russian Hacker Story 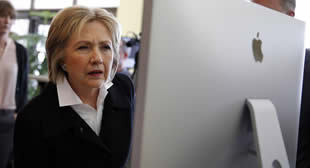 The failure of the US authorities to present any proof to back its claims of Russia’s involvement in hacking the Democratic National Committee (DNC) has caused an uproar in the US media, while America’s top spy calls on the nation to stop blaming Russia.

Americans need to calm down and stop blaming Russia for hacking the Democratic National Committee, Director of the US National Intelligence James Clapper said on Thursday.