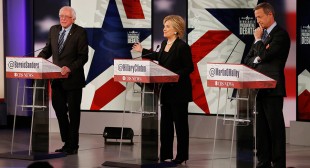 At the Democratic presidential debates Bernie Sanders blamed US policy in the Middle East for creating instability in the region. Martin O’Malley joined the criticism, while Hillary Clinton had a hard time defending her vote supporting the Iraq invasion.

The trio of Democrat presidential nomination contenders met for the second debate in Des Moines, Iowa on Saturday.