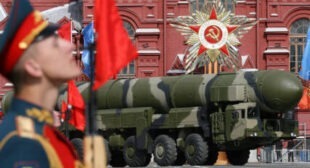 The Russian military is not as powerful as its Soviet predecessor, and Russia is only fourth or fifth in the world in terms of total military spending, but remains the only nation capable of challenging the United States in both conventional and nuclear forces, and subsequently is one of just two countries assuring global strategic stability.

The US intelligence community sees Russia as the “largest and most capable” weapons of mass destruction-armed rival to the United States, and Moscow is expected to retain that status for the foreseeable future, a newly published intelligence assessment indicates.