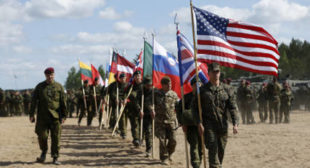 After the collapse of the USSR, NATO planned to divide Russia into small parts diminishing the state to the size of the medieval Moscow principality, a veteran of the Russian “illegal” intelligence service said during the Vesti v Subbotu (“News on Saturday”) program of Russia’s Rossiya 1 broadcaster.