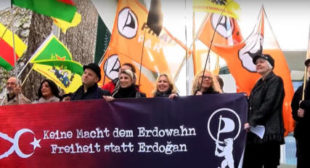 Dozens of pro-Kurdish activists alongside members of Germany’s Pirate Party have held a rally outside the Chancellery in Berlin rejecting Angela Merkel’s cooperation with the Turkish President, which they claim made her an accomplice in human rights violations.

Gathered outside the seat of the Chancellor, demonstrators wielding Kurdish flags and banners were addressed by Bruno Kramm, the head of the Berlin branch of Germany’s Pirate Party.