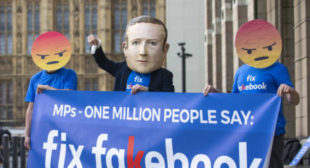 The temporary ban of a left-wing, pro-Palestine Facebook page was a part of a “massive rearguard action on the part of the establishment” carried out in the name of “fake news,” argued George Barda, of Occupy London, told RT. Upon reinstating the Occupy London page, which has more than 150k followers, Facebook said the ban was a mistake, though, according to Barda, the company gave “no reasonably explanation” for the initial ban, leading to suspicion from the group that the censure was over pro-Palestinian messages posted by the group.