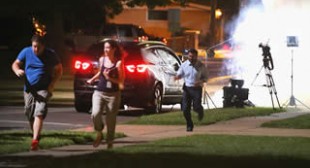 The Huffington Post’s Ryan J. Reilly and the Washington Post’s Wesley Lowery were arrested Wednesday evening while covering the protests in Ferguson, Missouri after the death of unarmed black teenager Michael Brown, who was shot by a police officer last week. The journalists were released unharmed, but their detentions highlighted the town’s ramped up police presence, which has left numerous residents injured by rubber bullets, pepper spray and tear gas during protests held every night after Brown’s death.