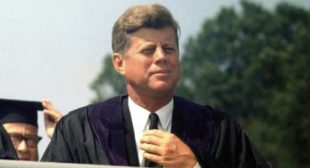 John Wight: The story of history is the story of the roads not taken, and never more so than when it comes to the life and legacy of John F Kennedy. The 55th anniversary of Kennedy’s ‘Peace Speech’, delivered in the form a commencement address to students and faculty at the American University in Washington on June 10, 1963, is a time to lament the loss of a leader who, by the time of his assassination, was on a journey towards ending the Cold War in conjunction with Soviet premier Nikita Khrushchev.