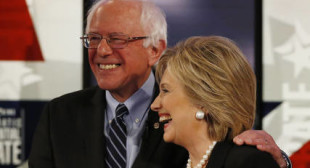 Hillary Clinton lost the New Hampshire primary vote, but her concession speech sounded like that of a winner, specifically the one who had just defeated her: Bernie Sanders. On the issues of big banks and campaign finance reform, the echo was clear.

“Senator Sanders and I both want to get secret unaccountable money out of politics,” Clinton told supporters on Tuesday night after results showed her coming in at a distant second place.