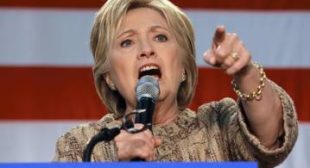 Although Hillary Clinton selected Tim Kaine as her Vice President in this campaign, her true running mate might very well be her vagina. Indeed, while Clinton’s support continues to be among the lowest for any Democratic nominee in recent memory, she has managed to position her gender as a focal point of her campaign, a move intended to capture the women’s vote among liberals and conservatives alike. And, considering her opponent is Donald Trump, a man seen by millions of women as a misogynistic loudmouth, she has done this quite successfully.