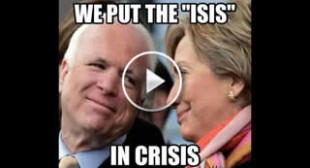 Hillary Clinton is a bold-faced, war-warmongering, bloodthirsty compulsive liar – with an ego the size of the White House.

Hillary Clinton says that she is the most transparent woman in American politics. There’s just one problem – Hillary Clinton lies… a lot. Ben Shapiro takes a trip in the way back machine to look at a few of the more egregious examples.