Hagel: ISIS is the real threat, US needs to work with anti-ISIS players with common interests 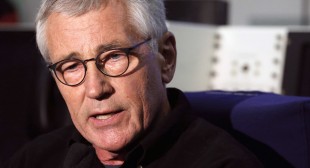 US policy in Syria should shift from ousting President Bashar Assad to siding with other powers who share a common interest in fighting ISIS, former US Defense Secretary Chuck Hagel said in an interview with CNN.

Combating Islamic State (former ISIS/ISIL) is not about making an alliance with Moscow, former Secretary of Defense Chuck Hagel told CNN’s Jake Tapper on “State of the Union.”