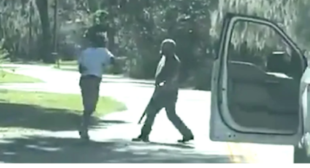 Newly surfaced cellphone video of the February murder of 25-year-old Ahmaud Arbery has prompted Georgia prosecutors to release evidence to a grand jury in an attempt to bring charges against the two men involved in the fatal encounter.

Footage of the incident, released Sunday by activist Shaun King on social media, shows Arbery running in the neighborhood of Satilla Shores in the coastal city of Brunswick, Georgia, on February 23.