Germany wants its gold back 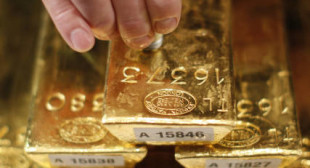 The Bundesbank has announced plans to repatriate some of Germany’s gold reserves from abroad. At least half of the country’s gold would be transferred to Frankfurt by 2020, according to Bundesbank President Jens Weidmann.

Weidmann says 366 tons of gold worth €11.5 billion have been delivered to Frankfurt so far. “There are now about 1,400 tons or 41.5 percent of our gold reserves here,” the banker said.