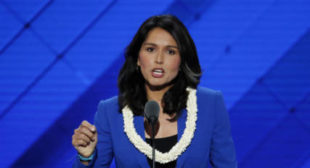 The Hawaii congresswoman and Democratic presidential candidate, who deployed to Iraq during her service with the US Army National Guard, has repeatedly warned that a conflict with Iran would be “far more devastating” to the US than its Iraq campaign. Congresswoman Tulsi Gabbard has issued a series of statements slamming President Trump for the drone strike which killed senior Iranian Revolutionary Guard Commander Qasem Soleimani, saying that the president’s actions were dragging the US into a “quagmire” and possible “war with Iran.”