From partner to rival: Germany to designate Russia ‘a security challenge’ – report 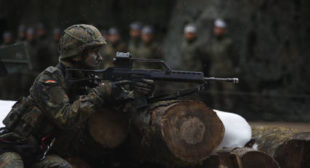 In the upcoming government security policy guidebook currently being prepared by the German Defense Ministry, Russia will be designated one of 10 major challenges on par with terrorists, migrants and global climate change, reported Die Welt.

The so-called White Paper is to be released sometime after the British referendum on EU membership,