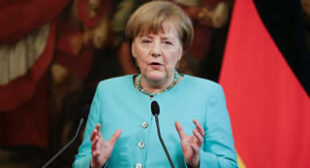 German Chancellor Angela Merkel has come out with her approval for the creation of a common economic zone between the European Union and Russia.

The chancellor made the statement during a congress of the regional branch of the Christian Democratic Union in the federal state of Mecklenburg-Western Pomerania, according to Frankfurter Allgemeine Zeitung.