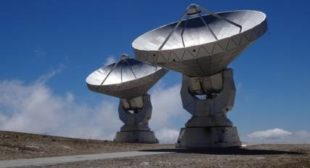 Astronomers from around the world have long been fascinated by the mysterious radio signals bombarding our planet from deep in outer space, with some onlookers linking them to a possible extraterrestrial intelligence. A new study by an international team of scientists led by astronomers at the Canadian Hydrogen Intensity Mapping Experiment Fast Radio Burst Project (CHIME/FRB) in British Columbia has discovered that a mystery radio source in a galaxy some 500 million lightyears from our solar system is sending out fast radio bursts like clockwork in 16.35 day cycles, including 1-2 bursts per hour over a four day period and then 12 days of silence before starting up again.