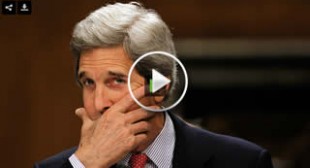 Washington is considering a Russian proposal of direct military talks regarding the situation in Syria, US Secretary of State John Kerry said as his spokesman struggled to explain the setbacks to US efforts against Islamic State militants in the region.

Reporters grilled deputy State Department spokesman Mark Toner over revelations that only a handful of US-trained “moderate Syrian rebels” remained in the fight.