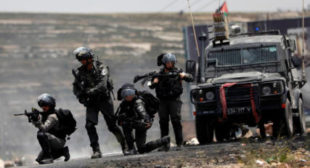 Ireland’s foreign minister is being accused of hypocrisy for failing to expel Israel’s ambassador over the IDF killing 60 Palestinians on Monday, despite sending a Russian diplomat home over the Skripal case without evidence. Foreign Minister and Deputy Prime Minister Simon Coveney expelled a Russian diplomat in March following Britain’s claim that Russia was behind the poisoning of double agent Sergei Skripal and his daughter Yulia in Salisbury, England.