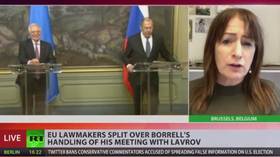 Hand-wringing over Alexey Navalny is but an excuse to target Russia, and the EU should not lecture anyone about human rights when it turns its back on Julian Assange and other cases closer to home, Irish MEP Clare Daly told RT.

“We have this narrative of supposedly European values, whatever they are, that we’re supposed to bring them to the rest of the world and that Russia isn’t playing ball with that, which is obviously nonsense,” Daly told RT on Wednesday.

Daly made waves on the floor of the European Parliament on Tuesday, when she condemned the “relentless Russophobia” of her colleagues and said that they wouldn’t even be discussing the Russian political activist if “he had been arrested anywhere else other than in Russia.”