Escalating Cold War, US Flies B-52 Bomber Over South Korea 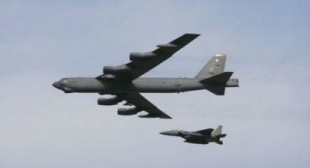 The U.S. military flew a B-52 bomber over South Korea on Sunday, in a Cold War-style show of force that was met with concern by human rights campaigners.

American forces made the gesture amid climbing tensions following North Korea’s widely-disputed claim that it detonated a hydrogen bomb test on Wednesday.