Eiffel Tower Lights Up in Colors of Belgium’s Flag 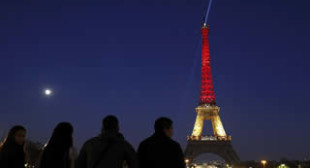 Following the deadly terrorist attacks in Paris in November, Brussels’ town hall was lit in the colors of the French flag. Today, sadly, the Eiffel Tower is being lit for Brussels.

On Tuesday, Paris Mayor Anne Hidalgo announced that the tower would be lit in black, yellow, and red, to show solidarity after terrorist attacks of the morning left at least 31 dead and many more injured.