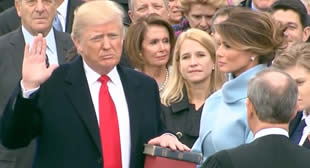 After his election, Donald Trump had a narrow path to a transformational presidency, but it required breaking the neocon grip on U.S. foreign policy and telling truth to U.S. citizens. Already, Trump has failed, says Robert Parry.

The 100-day mark may be an artificial measuring stick for a U.S. president. Obviously much can happen in the remaining 1,361 days of a four-year term. But Donald Trump’s decisions in his first three months in office have put him on an almost irreversible path to failure.