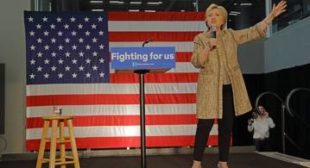 Could Hillary lose? If she were running against a Republican whom the Party’s grandees and the capitalists behind them liked, someone like Mitt Romney, the answer would be Yes.

After eight years of President Drone, the Republican would have a clear advantage. It wouldn’t even matter if that Republican were to pander, say, to the Ted Cruz element in the GOP base, the way that Romney pandered to the Tea Party.