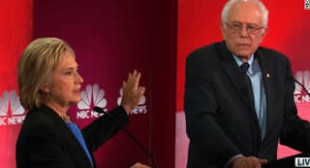 Hillary Clinton has judged that she can wait out public calls for her to release the transcripts of speeches to Goldman Sachs, which earned her $675,000 in 2013, since she expects to soon wrap up the Democratic presidential nomination, as Chelsea Gilmour describes.

One of Bernie Sander’s standard attack lines against Hillary Clinton has been to call attention to the hundreds of thousands of dollars in paid-speaking fees and donations that Clinton has received from Wall Street during her career, including $675,000 for three paid speeches to Goldman Sachs (at $225,000 a pop) after she left the State Department in 2013.