By shooting down Russian jet, Turkey exposed as more than terrorist accomplice 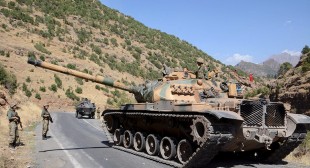 Turkey has shown its hand by destroying the Russian warplane over Syria and followed through on its previous threats to Russia. We must now regard Turkey as a hostile state that supports terrorism.

As has been widely reported, on November 24, Turkey – an EU aspirant NATO member – shot down a Russian warplane on legitimate Syrian duties.